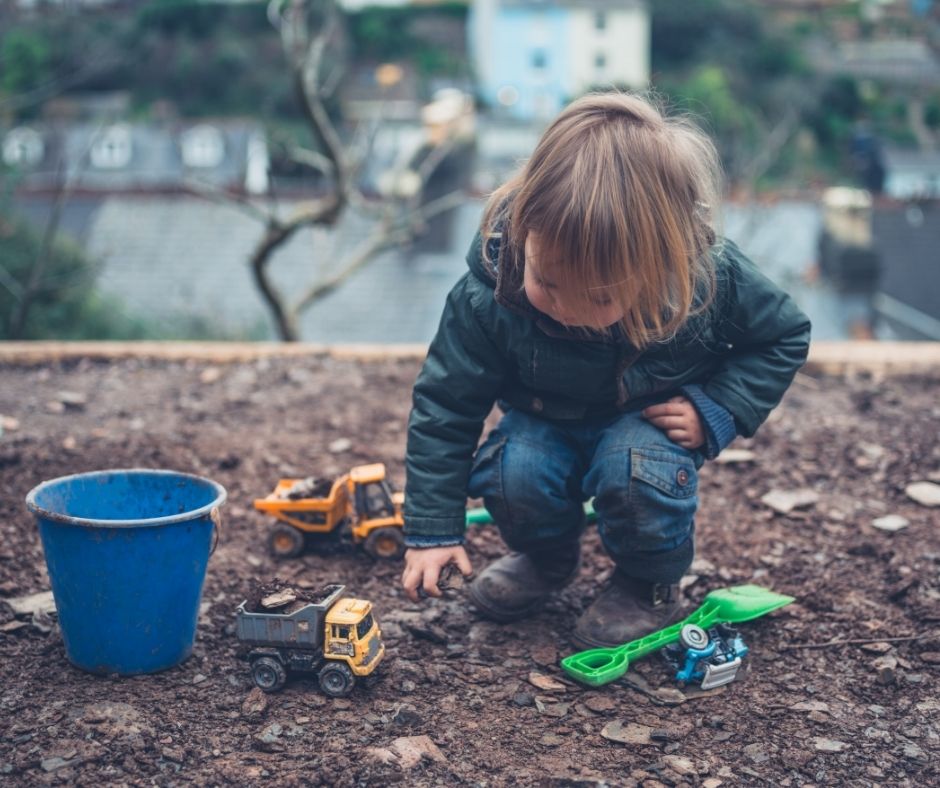 As children grow they move through different stages of development. Their social development can be observed in the way that they play. Mildred Parten was a sociologist in the early 1900s and we still use her research on the ‘stages of play’. Children tend to move forward through these stages but will return to the earlier stages at times.

Over the years I have mostly worked with Kindy children, so have seen lots of associative and cooperative play. I have also spent time nannying younger children and now with my one 18month old daughter, I am getting to experiences more of the early stages of play development.

Unoccupied play is what we see in very young babies – imagine a baby lying on their bed looking up at the lights. This type of play does not involve language and the babies do not seek social interaction. When my daughter was young she loved staring at the ceiling fan.

Solitary or Independent play is mostly seen in babies and toddlers. They will choose their own activity and focus on it without seeking social interaction. They do not share toys or resources. Think of a toddler playing by themselves with a car, who is uninterested in what others are doing. Independent play is also a great skill for older children to have, this can give them a break from the socially demanding group play.

When children are in a new environment or with older children they will often engage in onlooker play. Children will watch what is going on and may chat with the children who are playing but won’t try to join in. Think about a toddler who sees a group of preschool children playing soccer.

During the toddler years, children will often engage in parallel play. In this type of play, children are becoming aware of others around them and will choose an activity with other children, however, they do not seek interaction. We can see parallel play when watching a group of children at the playdough table who are all playing by themselves.

During associative play, children are still focused on their own game but will share resources and engage in social interaction. You might see your child playing with others in the sandpit, they will share buckets, spades and trucks but are each working on their own creation. This play develops when children become more aware of others, around 3-4 years old.

When you see an organised group of children playing together they are engaged in cooperative play. They will have a shared goal, be able to assign roles within the game and can create and follow their own rules. This is a very social type of play and requires well developed social and emotional skills to negotiate. We see this type of play in Kindergarten children.

Watching the way that children play gives you an understanding of their development and an insight into how their social skills are developing.

PrevPreviousNursery Rhymes – how many verses of Twinkle Twinkle do you know?
NextFinding Your TribeNext

What is our role in play?

Self Care for Educators

If “good girl” or “good boy” is not the right thing to say, what is?

Who Is Rise Early Learning?

At Rise Early Learning we deliver high-quality early childhood education and care that provide positive life outcomes for all children. Our early childhood programs encompass a holistic approach to learning underpinned by the renowned RIE approach.